Sanctuary at The Walthamstow Wetlands

This activity, dancing at the Wetlands, allows LGBTQI asylum seekers and refugees to use their bodies to express themselves and to heal past trauma. Micro Rainbow's social inclusion programme is a key element of our holistic approach to integration. 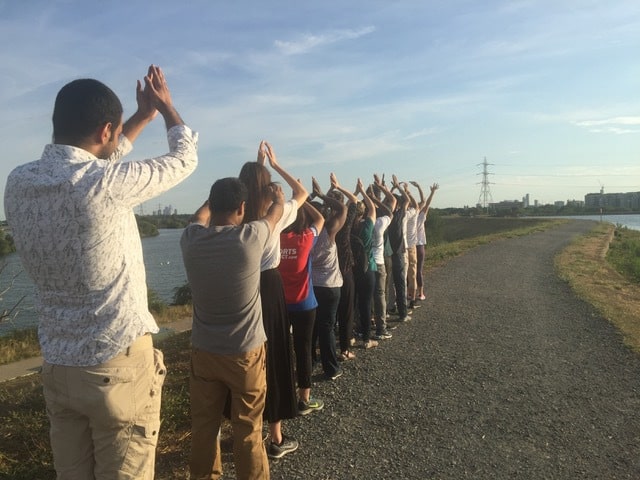 Home > Moving on > Sanctuary at The Walthamstow Wetlands

To kick start a series of dance/movement workshops led by resident choreographer Fearghus Ó Conchúir – and proudly sponsored by our allies at Wilsons Solicitors LLP – LGBTQI asylum seekers and refugees from Micro Rainbow visited the Walthamstow Wetlands on a fine summer’s evening this June.

The Walthamstow Wetlands is a reservoir site that has provided clean water to boroughs of London for over 150 years. Equally important, the site has been a place of refuge and shelter for various types of wildlife and has become an internationally important nature reserve for waterfowl and exotic birds, which migrate thousands of miles to get to the Wetlands.

In light of this, it is particularly fitting that the Wetlands welcomed refugees and asylum seekers seeking a place of sanctuary.

Why is this project important?

LGBTQI asylum seekers and refugees are victims of persecution and violence because of their sexual or gender identity, or intersex status. They come from countries such as Algeria, Bangladesh, Nigeria, Pakistan, Uganda and Zimbabwe, where homo and transsexuality are criminalised. They have been subjected to harassment, imprisonment, forced marriage, rape, trafficking, gender and sexuality-based violence, and domestic violence.

In the UK, the stress of reliving their traumatic experiences whilst claiming asylum, together with the discrimination they experience as refugees, exacerbates the low self-esteem and lack of confidence experienced by LGBTQI asylum seekers. They are also excluded by their family members, compatriots, Black Asian, Minority Ethnic, and Refugee (BAMER) communities, and religious spaces where refugees traditionally receive support. They face extreme isolation as a direct result of their sexuality, gender identity or intersex status. Group-based activities that increase confidence and self-esteem, and build life skills and new connections, are much-needed but rare.

The visit to the Wetlands was one such rare opportunity. The group of eight LGBTQI refugees and asylum seekers from Micro Rainbow were given special out of hours access to the site. They were treated to a guided tour, which was as much fun as it was informative. Parallels were drawn between the site being a place of refuge and tranquillity for various types of wildlife, and a place of sanctuary for those refugees and asylum seekers who have had to flee persecution in their home countries.

The tour was followed by a choreography session in The Old Engine Room inspired by the movements of the birds and other wildlife in the reserve. The workshop series is intended to give members a space to freely express themselves using their bodies. At Micro Rainbow, we focus on expressive creativity to help heal the trauma that LGBTQI refugees and asylum seekers experience because of the persecution they suffered. We have seen first-hand the positive impact this type of creativity can have in boosting confidence, relieving stress and engendering a great sense of community within our group.

We received fantastic feedback from our members following the visit to the Wetlands.

“Being at the Wetlands, I am reminded of playing in the fields barefoot as a child in my home country. The nature is so peaceful and relaxing” – Patience, lesbian refugee from Nigeria

“I feel calm, at peace and in touch with nature. I never thought I could find such a place in the heart of London” – Xee, gay refugee from Pakistan

Our members are now looking forward to doing choreography outdoors and drawing further inspiration from the movements of the majestic birds of prey that call the Wetlands home.

If you are an LGBTQI asylum seeker or refugee and you would like to take part in an upcoming workshop, please contact us at [email protected] and sign up to our beneficiary newsletter to receive regular updates on Micro Rainbow’s social inclusion programme.

Wilsons Solicitors is a law firm that specialises in Immigration, Public, Family & Criminal Law. They value having a social conscience. They also do legal aid work and act for some of the most vulnerable and disadvantaged people in society, including LGBTQI asylum seekers. The partners and staff are active in a whole range of social and campaigning issues related to their core legal work.

Gathering at The Walthamstow Wetlands was a great initiative that our members are delighted by. However, transportation costs often pose a barrier to addressing the social exclusion faced by many LGBTQI asylum seekers and/or refugees who cannot afford to attend workshops regularly. Thankfully, our allies, supporters and friends at Wilsons Solicitors LLP have funded transportation costs for these workshops, and we are extremely grateful to them.

This partnership has helped to empower and improve the lives of the LGBTQI asylum seekers and refugees supported by Micro Rainbow.

If your company would like to discuss how it could partner with us to support our work, please contact us at [email protected]

For any moving on enquiries please email